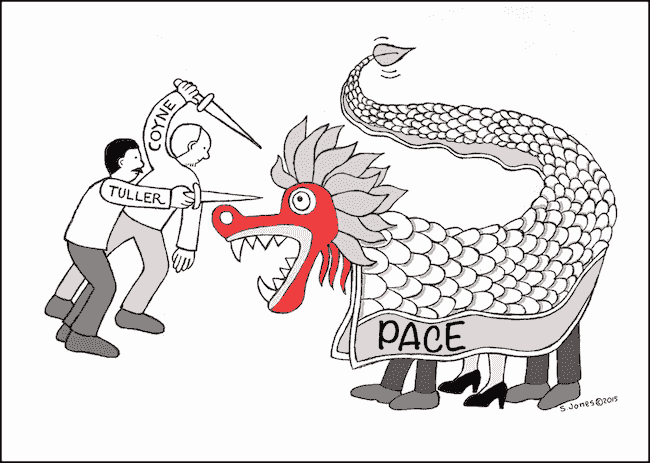 When the PACE trial data was released in August, 2016, scientists from around the world called for a retraction of the PACE trial research published in "The Lancet."

Hidden behind the dragon’s skirts are Michael Sharpe, Trudie Chalder and Peter White, principal investigators in the PACE trial. The PACE trial has not been retracted, to date. It continues to negatively impact such frequently used websites as the Mayo Clinic and the Cleveland Clinic.

The CDC has quietly dropped cognitive behavioral therapy and graded exercise therapy as treatment options for ME/CFS from its website.

Tom Kindlon has been described as a “one-of-a-kind gentleman and scholar, with lots of heart.”

Although housebound, he has become one of the most effective advocates for people with ME/CFS.

His detailed analysis of the PACE trial pointed out that “caution needs to be used proposing that any individual ME/CFS patient can safely increase their total exercise or activity levels using CBT or GET.”

Researchers at the University of California San Diego School of Medicine have found a chemical signature in the blood of ME/CFS patients.

According to Robert Naviaux, the primary researcher in the study, "the signature is similar to the state of dauer, and other hypometabolic syndromes like caloric restriction, diapause and hibernation."  If replicated, the study might provide hope of a biomarker for millions of sufferers worldwide.

Update: I was honored that Robert Naviaux used this cartoon in a lecture at the Stanford University ME/CFS symposium on August 12, 2017. 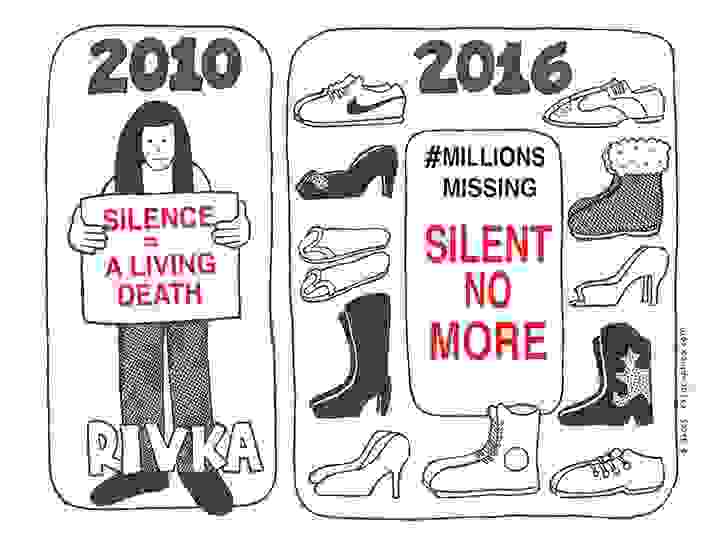 On August 13 &14th, 2010, Rivka Solomon stood alone as a one woman protest in front of the Red Cross headquarters and the U.S. Department of Health and Human Services in Washington D.C. At that time, she called for people to protest in small groups for improved government funding for ME/CFS.

Almost six years later, on May 25, 2016, led by #MEAction, groups of people protested in cities around the world to demand that their governments fully fund ME/CFS research.

Thank you to Rivka and to everyone who was part of the #MillionsMissing campaign. Silent no more!

As of May 11th, 2019, the ME/CFS MillionsMissing protests continue worldwide.

This cartoon was created after seeing Jennifer Brea's film "Unrest."  The film follows Jen and other ME/CFS sufferers as they try to cope with a serious life-changing illness, mostly without the help of the medical profession.

I hope this film will be widely seen by the medical community, and that minds will be changed and doors opened as a result of this award winning film.

"Unrest" is available on Netflix

In fact, Ron Davis at Stanford applied to the NIH to fund the nano needle work and was turned down. Reviewers were very critical of his proposal and said it wouldn't work in spite of good preliminary data.

The nanoneedle blood marker discovery in ME/CFS was funded by patients, not the NIH. 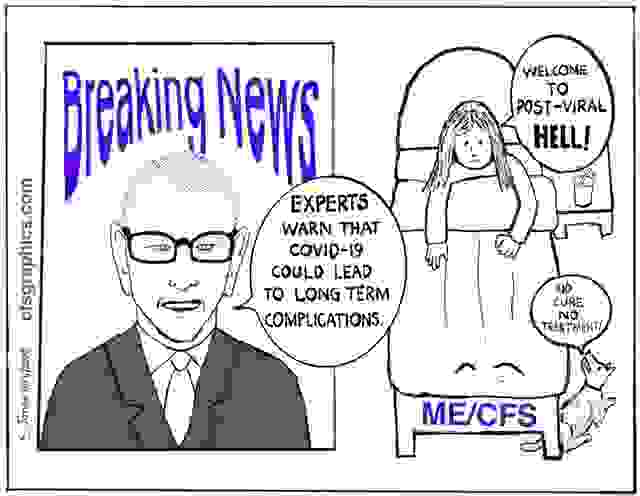 Near the end of 2019 a worldwide pandemic engulfed the United States.

As of March 18, 2021, over 538,000 Americans have died from the COVID-19 virus. Of those who have had the virus, many are facing a prolonged recovery and have symptoms resembling ME/CFS. 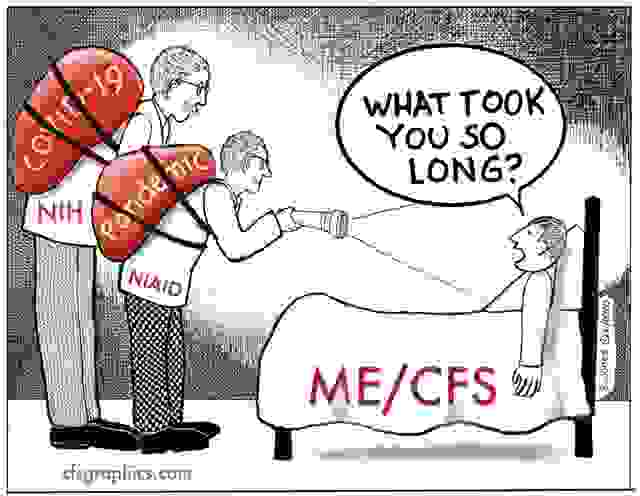 On July 9, 2020:, Dr. Anthony Fauci, Director of the National Institute of Allergy and Infectious Diseases, said:

“There may well be a post-viral syndrome associated with Covid-19,”

Fauci said the symptoms resemble those seen in patients with myalgic encephalomyelitis, or ME, once known as chronic fatigue syndrome.

Long COVID is a disaster, but not a surprise.